In five months the Sri Lankan government crushed the secessionist rebellion of the Tamil Tigers after years of civil war and terrorism. The Tigers had invented suicide bombing, had taken control of the North of the country, set up their own military, police, laws, government, and taxes. It had been a running sore for twenty five years marked by extreme violence. 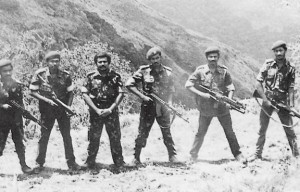 The crushing involved heavy bombing and a military sweep kettling all the Tiger-controlled population of the North into smaller and smaller areas until the last tens of thousands were all crowded on one beach at the mercy of the victorious army. United Nations personnel had been expelled and media kept away. Areas the government designated No Fire Zones and Safe Zones at the prompting of the UN and Red Cross were heavily bombed. Hospitals seem to have been targeted (the Red Cross gives the GPS co-ordinates of hospitals to attackers so that they can be avoided).

At the final victory the leaders of the Tamil Tigers were assassinated, although they surrendered. The leader’s twelve year old son was shot. Women were raped and murdered. Prisoners were summarily executed. There were many war crimes (targeting civilians, shelling Safe Zones, rape, the execution of prisoners).

This raises difficult questions for me because the crimes are terrible but I can see the ruthless and necessary logic of some of them. You do not want, after a long civil war characterised by horrible violence and endless terrorist attacks from the Tigers, a messy inconclusive outcome. If they are not going to negotiate an agreement on a federation with degrees of autonomy, one that ends the conflict, and you have decided that you must crush them, then, if you are the responsible power, you must make a clean sweep. You do not want the end to be left in the hands of civil rights lawyers, with violent leaders grandstanding in courtrooms. It would be dangerous to leave martyrs incarcerated, organising mayhem from their cells, and waiting for rescue so that they can rise again. Kill the leadership. End it. If it is a dynastic leadership, kill the heir. The hopes of revival have to be crushed. Biafra has not come back again. The Albigensians and Cathars are finished. The Confederates are not going to secede any more.

Nobody thinks it was a great injustice to get rid of Ceaucescu, Milosovic, Gaddafi or Osama Bin Laden when surrendering. Saddam Hussein was quickly tried and hanged. Violent, rabble-rousing mischief-making political leaders live by the sword, perish by it, and good riddance. We cannot write this into international law, but the vast amount of harm they can do makes these leaders an exception to the usual rights of defendants. It may be necessary to ruthlessly eliminate them, all trace of them, and leave no shrine, no relics, no successor. But how far should our ruthless exceptions extend?

The exceptions should be exceptional and should not ever be stretched to executing common soldier-prisoners, or shelling civilians in designated Safe Zones and hospitals. The rape-murder of captured women is monstrous criminality. The exceptions are limited to the leader and the leader alone, in my view, and will have to be covered up, as far as possible, with lies about accidents and regret. A sacrificial scapegoat will be required. An old general or Prime Minister will have to be sacked, or even prosecuted. Otherwise you completely undermine all the legal principles of the Geneva convention; the moral high ground has gone; your right to castigate violent dictators has gone.

I understand the Sri Lankans beheading the Tamil leadership. But they should indeed be condemned for taking the same brutal path with civilians and common soldiers.

Justifying the exceptions will take hypocrisy, moral fudge and weasel words. It is nasty work. It is a crime, a necessary crime, and will have to be redeemed by magnanimity to the defeated, compensation, lots of investment, and careful, generous nation-building.