Stephen Sondheim tells us in Finishing the Hat that there are three rules and three sins in writing lyrics. 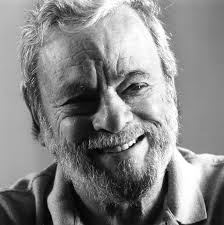 Poetry is an art of concision, lyric an art of of expansion, he tells us. I think he must mean that poetry has to say it all, but the lyric can allow the music to expand a simple theme and give it colour and tone. And even profundity. 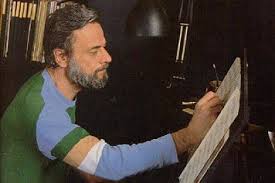 His lyrics are written for the theatre, of course, and often in comedy, so he lays a lot of emphasis upon the voice of the character. The lyric must be written in character, and in the dialect of the character. It can use the three sins above, but only if the character is verbose, or the character makes pathetically strained jokes, and then only sparingly, just enough to establish the character. He is proud of his Brooklyn rhymes: ‘stickler’ with ‘partic’ler’, and likes to take advantage of the idiosyncracies of his character’s language. This is what is meant by Rule Three, ‘God is in the detail.’ My own Mrs Bride lyric uses prisoners’ rhyming slang (bird-lime for time) for the refrain, and common prison slang for the last line:

The Mrs Bride refrain is also an example of Rule One, ‘Content dictates form.’ The subject is meditation in prison. The musical setting can enact the meditative focus on the breath, the breathing in and breathing out, in real inhalation and exhalation time. So the line is simple, but the musical performance expands it into an experience, and the addition of, “That’s how I do my bird,” expands it again into a whole life strategy. Breath dictates the form of the song. “The lyric can be plain,” says Sondheim, “but soars when infused with music.” You breathe; it fills all time; it soars. ‘Less is more.’ Rule Two.

A poet speaks in her own voice, but song lyrics are best when dramatic, set in the middle of a relationship, and written in the voice of a character. In writing these lyrics for Nick I discovered that I liked dramatic situations with two or three characters. The best example of three characters is a song we wrote for Krystyna to sing, Mummy’s Bright Red Skirt:

You’ll be kind and let her sleep

Bring her tea when she swears

Give her cuddles, give her comfort

Do her broken-heart repairs

Take no notice when she rages

When she throws your toys about

You can take more than your daddy

When she blew your daddy out

You’ll help her next adventure

She’ll giggle that you flirt

…and so on. There is a story here with three main characters (and a minor fourth, the absent father): the mother, the child, and the speaker, who must be a well-meaning friend, aunty or neighbour. The three-way relationship softens the painful subject of neglect, and contains it, because the characters are coping, and there is love between them. I’ll ask Nick to post the song for you.

Sondheim compares a lyric to a short story condensed down so that each line of the lyric has the weight of a paragraph. Less is more, make the most out of the least, otherwise the song diffuses.

He also says that lyrics demand perfect rhymes, and he is absolutely right about that. The sort of half-rhymes that look clever in a modern poem are no use at all in a song. The rhyme must be clear and must chime. Near-rhymes are never as good and weaken the effect. A poet can write for re-reading, for a reader who muses on each line, but a lyricist has to get the line to work on first hearing. Sondheim quotes Craig Carnelia: “True rhyming is a necessity in the theater, as a guide for the ear to know what it has just heard.”

I also like to keep to a strict rhythm, that perfectly matches the song line, but I know that many songs have more flexibility than that. A singer can stretch a single syllable into a line, or crowd excess words into a bar of music. Songs can have fluid line-lengths. But that is something a pop star can get away with that would not work in a song for a musical, which must hit its points crisply and match the dance. The effect is weakened if the structure is not perfectly made. 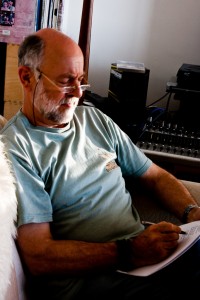